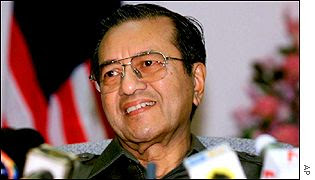 1. I would like to congratulate the new Ministers and Deputy Ministers chosen by Dato Seri Najib.

2. The exclusion of Khairy Jamaluddin, UMNO Youth head who was found guilty of corruption by the UMNO disciplinary committee but allowed to contest for head of UMNO Youth seem to indicate a desire on the part of the new Prime Minister to rid UMNO of the blatantly corrupt politician.


3. Unfortunately the inclusion of several unsavoury characters who had been accused of being corrupt while in the previous Government, seem to negate this desire.

4. The Government must know that it has less than three years to regain the support of the people. A good opportunity for doing this by meticulously excluding dubious characters has been partially overlooked.


5. Ministers and Deputy Ministers are required to declare their assets during my time. So are the Menteris Besar and Chief Ministers.


6. But the declarations did not reveal much. Some Ministers were queried by the then Anti-Corruption Agency but no charges could be made.


7. Still talks about corrupt Menteris Besar and Chief Ministers in particular were frequently heard. No one was prepared to come forward to give evidence.


8. In the end I had to simply drop the MBs whom I heard were corrupt. No charges were made against them as they would not stand up in a court of law.


9. What matters is that the level of corruption among Ministers and civil servants was never high before and did not hamper the implementation of Government projects and did not result in abuses of Ministerial power.


10. I don't believe that corruption can be totally eradicated. But it can be minimised. From the complaints I hear today, corruption especially in the Government party has reached record levels during the tenure of the last PM. Certainly everyone is aware as never before of the corruption of the candidates for the UMNO Supreme Council. The results of the enquiry by the Disciplinary Committee are hardly satisfactory. But a committee member has said that the enquiries would go on.


11. I hope there will be no cover-up whether by the UMNO Disciplinary Committee or by the Malaysian Anti-Corruption Commission even if the corruption involves big names in the Government.
Posted by WARGA PRIHATIN MALAYSIA (PRIMA) at Friday, April 17, 2009