URUMQI, China – Mosques in riot-hit Urumqi were ordered to stay closed for Friday prayers in the wake of ethnic violence that has killed at least 156 people, an official said. The prayers after midday are a focal point of the week for the minority Muslim Uighurs in Urumqi, and Chinese authorities took the rare step of restricting them in apparent attempts to deter any large, emotional gatherings at the mosques. "For the sake of public safety all of the mosques have told people that there will be no Friday prayers and that people should stay at home today and pray," said the official at the Yang Hang mosque in downtown Urumqi (pronounced uh-ROOM-chee). She said she was a government worker but refused to give her name. - (Pix - AP - The gate to mosque is padlocked in Urumqi, western China's Xianjiang province, today 10 July 2009).
Outside the mosque with its gold dome and twin minarets, people stopped to read a white paper notice canceling Friday prayers. One middle-aged Uighur (pronounced WEE-ger) woman who would not give her name said she thought the mosque should stay open. "It's not necessary to close it because everyone who enters the mosque is a Muslim. It will be safe," she said. "We just don't have any power," she added, then was pulled away by her husband. Nearby, an elderly Han Chinese woman interrupted a foreign reporter before he could talk to two elderly Uighur women in long traditional dresses and headscarves.
"Of course, the mosque should be closed. Just look at all the damage that has been done," the Han Chinese woman said in a loud voice. "This is a patriotic move for the sake of the well-being of all the ethnic groups," she said before stomping away without giving her name. The other two quietly walked away as well. The violence in Urumqi began Sunday when Uighurs clashed with police while protesting deaths of Uighur factory workers in a brawl in another part of the country. The crowd then scattered throughout Urumqi, attacking Han Chinese, burning cars and smashing windows. Riot police tried to restore order, and officials said 156 people were killed and more than 1,100 were injured.
Thousands of security forces have been patrolling the streets, but that wasn't enough to keep vengeful Han Chinese mobs from hunting down Uighurs on Tuesday. China's top Communist Party leaders have said that ending the ethnic feuding was now "the most urgent task." An official at the China Islamic Association in Beijing, who gave only his surname Jin, said mosques in China have been ordered to suspend Friday prayers before, during the country's outbreak of SARS in 2003. "Our religion is quite flexible, so it's possible to cancel for the benefit of everyone," Jin said. The head of the association, Chen Guangyuan, in an excerpt from a speech posted to the association's Web site Friday said the violence was caused by "evil people" intend on causing ethnic splits. "Don't be fooled by evil people." Chen said.
Uighurs generally practice a moderate form of Sunni Islam that was prevalent in Central Asia under Soviet rule. More militant and austere forms of Islam have made inroads in recent decades. But the government controls the appointments of clerics, helping to deny a pulpit to imams who disagree with official policies. Restrictions on their religion already rankle among Uighurs, a Turkic-speaking people who have complained about the influx of Han Chinese, who make up more than 90 percent of China's population, in the remote western region.
At the Liudaowan mosque in Urumqi, the imam, or priest, Memeti Imam Damala, said the mosque received a notice Thursday night saying not to hold prayers. "You should know the reason why," he said. Security was still noticeable, but not has heavy as in the last several days in Urumqi, with paramilitary officers guarding intersections. Other cities in Xinjiang, such as Kuqa, where bombs were set off before the Olympics last year, said mosques were open.
In Kashgar, a frontier city in southwestern Xinjiang near Pakistan, Afghanistan and Tajikistan, reporters had been told to leave the city Friday, but there was confusion on whether the order would be carried out.
An official with the city's Foreign Affairs office, who gave his name as Keidser, said "all foreign guests in Kashgar had to suspend their travels, group activities and especially interviews and leave Kashgar." A group of about 10 journalists were taken by government officials to the airport. They were later told they may be allowed to stay but had not been allowed to leave the airport. - Associated Press writer Gillian Wong in Urumqi and Associated Press photographer Elizabeth Dalziel in Kashgar contributed to this report.
Posted by WARGA PRIHATIN MALAYSIA (PRIMA) at Friday, July 10, 2009 No comments: 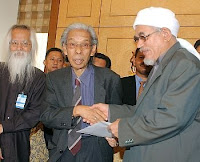 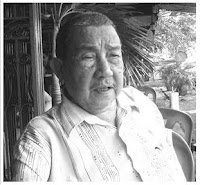