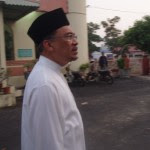 ONE way he would improve racial ties in Malaysia if he were Prime Minister, said opposition leader Anwar Ibrahim, would be to stop awarding scholarships to the children of government ministers. Describing his experience when his eldest daughter Nurul Izzah — now Member of Parliament for Lembah Pantai in Kuala Lumpur — went to university,Mr Anwar said he was told he needn’t pay her fees as she was “automatically” given a scholarship. But Mr Anwar, who was then Malaysia’s Deputy Prime Minister and Finance Minister, persisted and the university eventually accepted his payment.

“This has to be stopped,” he said of the practice, which has angered families of poor Chinese and Indian students who qualified for assistance but did not receive it. Speaking at a lunch yesterday organised by the Foreign Correspondents Association of Singapore, Mr Anwar touched on a variety of topics, including racial harmony, Malaysia’s New Economic Policy (NEP) and his long-time political foe, former PM Mahathir Mohamad. Mr Anwar was also sceptical about current PM Najib Razak’s pledge that the controversial NEP would be reviewed. The policy gives privileges in government contracts, jobs, business, property purchases and education to Malays, and has resulted in a lack of opportunities for the minority races.

“He announced it here in Singapore, that he wants to dismantle the NEP, (but) nothing has happened since. You dismantle it in place of what?” asked Mr Anwar. “Do you still continue the old ways of disbursing funds to selected companies and to your cronies?” The opposition, on the other hand, outlined a plan several years ago to replace the NEP, said Mr Anwar, one that would make Malaysia compete aggressively with economies like South Korea and Taiwan. On Dr Mahathir, Mr Anwar said the former PM performed “remarkably well” in terms of reforming the country. He pointed out that the elder statesman had risen to prominence, though he did not come from an influential political family.
Posted by WARGA PRIHATIN MALAYSIA (PRIMA) at Wednesday, May 27, 2009