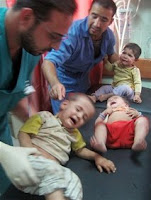 BAGHDAD – A truck bomb exploded near a Shiite mosque in northern Iraq following prayers, killing at least 25 people and wounding dozens, police said. The attack highlighted fears of more violence as U.S. troops face a June 30 deadline to withdraw from urban areas. The attack near the disputed city of Kirkuk came as Iraqi Prime Minister Nouri al-Maliki insisted that the Americans will withdraw on schedule. Worshippers were leaving the mosque in the Taza area following noon prayers when the truck exploded, according to police Brig. Gen. Sarhat Qader. He said at least eight houses were demolished and residents were working with rescue teams to search for people buried under the rubble.
Tensions have risen in the oil-rich area of Kirkuk as Kurds seek to incorporate it into their semiautonomous region despite opposition from Arabs, Turkomen and other rival ethnic groups. That has raised concerns about an outbreak of ethnic violence in northern Iraq even as attacks elsewhere decline. U.S. and Iraqi officials have warned they expect insurgents to stage attacks to try to provoke a new outbreak of sectarian violence and undermine confidence in the government's ability to protect its people.
A U.S.-Iraqi security pact requires the Americans to pull back combat troops from cities by the end of this month as a first step toward a full withdrawal by 2012. The deal includes a provision for the Iraqi government to ask for U.S. help if violence surges. Prime Minister Nouri al-Maliki insisted earlier Saturday that the withdrawal will take place on schedule, saying it will be a "big victory" for the nation. He acknowledged that more attacks were likely but said Iraqi security forces were prepared to deal with it.
Any extension would show a lack of confidence and would be a "historic setback," he said during a speech to members of the Turkomen ethnic minority. "We will not retreat no matter what happens and, God willing, nothing will happen because of the capabilities that our security forces have," he said. The Interior Ministry, meanwhile, warned it has received intelligence that some militants will try to stage attacks after the June 30 deadline.Ministry spokesman Maj. Gen. Abdul-Karim Khalaf, however, said the U.S. withdrawal will give the Iraqis more power to deal with the violence because they won't be limited by the need to coordinate with the Americans.
"That will provide a more flexible opportunity for Iraqis to reach their targets quickly," he said.