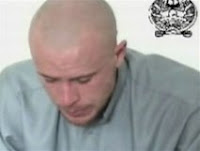 WASHINGTON – The American soldier who went missing June 30 from his base in eastern Afghanistan and was later confirmed to have been captured, appeared on a video posted Saturday to a Web site by the Taliban. Two U.S. defense officials confirmed to The Associated Press that the man in the video is the captured soldier. The video provides the first glimpse the public has had of the missing soldier. The soldier is shown in the 28-minute video with his head shaved and the start of a beard. He is sitting and dressed in a nondescript, gray outfit. Early in the video one of his captors holds the soldier's dog tag up to the camera. His name and ID number are clearly visible. (Pix - AP: This video frame grab taken from a Taliban propaganda video released Saturday, July 18, 2009)
He is shown eating at one point and sitting cross-legged. The soldier, whose identity has not yet been released by the Pentagon pending notification of members of Congress and the soldier's family, says his name, age and hometown on the video, which was released Saturday on a Web site pointed out by the Taliban. The soldier said the date is July 14. He says he was captured when he lagged behind on a patrol. He is interviewed in English by his captors, and he is asked his views on the war, which he calls extremely hard, his desire to learn more about Islam and the morale of American soldiers, which he said was low. Asked how he was doing, the soldier said on the video:
"Well I'm scared, scared I won't be able to go home. It is very unnerving to be a prisoner."
He begins to answer questions in a matter-of-fact and sober voice, occasionally facing the camera, looking down and sometimes looking to the questioner on his left. He later chokes up when discussing his family and his hope to marry his girlfriend. "I have my girlfriend, who is hoping to marry," he said. "I have a very, very good family that I love back home in America. And I miss them every day when I'm gone. I miss them and I'm afraid that I might not ever see them again and that I'll never be able to tell them that I love them again and I'll never be able to hug them." He is also prompted by his interrogators to give a message to the American people.
"To my fellow Americans who have loved ones over here, who know what it's like to miss them, you have the power to make our government bring them home," he said.
"Please, please bring us home so that we can be back where we belong and not over here, wasting our time and our lives and our precious life that we could be using back in our own country. Please bring us home. It is America and American people who have that power."
The video is not a continuous recording — it appears to stop and start during the questioning.
It is unclear from the video whether the July 14 date is authentic. The soldier says that he heard that a Chinook helicopter carrying 37 NATO troops had been shot down over Helmand. A helicopter was shot down in southern Afghanistan on July 14, but it was carrying civilians on a reported humanitarian mission for NATO forces. All six Ukrainian passengers died in the crash, and a child on the ground was killed.
On July 2, the U.S. military said an American soldier had disappeared after walking off his base in eastern Afghanistan with three Afghan counterparts and was believed to have been taken prisoner. A U.S. defense official said the soldier was noticed missing during a routine check of the unit on June 30 and was first listed as "duty status whereabouts unknown." Details of such incidents are routinely held very tightly by the military as it works to retrieve a missing or captured soldier without giving away any information to captors. But Afghan Police Gen. Nabi Mullakheil said the soldier went missing in eastern Paktika province near the border with Pakistan from an American base. The region is known to be Taliban-infested.
The most important insurgent group operating in that area is known as Haqqani network and is led by warlord Siraj Haqqani, whom the U.S. has accused of masterminding beheadings and suicide bombings including the July 2008 attack on the Indian Embassy in Kabul that killed some 60 people. The Haqqani group also was linked to an assassination attempt on Afghan president Hamid Karzai early last year. On Saturday, a U.S. military official in Kabul, Col. Greg Julian, said the U.S. was "still doing everything we can to return him safely." Julian said U.S. troops had distributed two flyers in the area where the soldier disappeared. One of them asked for information on the missing soldier and offered a $25,000 reward for his return. The other said "please return our soldier safely" or "we will hunt you," according to Julian.
___
Associated Press writers Robert H. Reid in Kabul and Christine Simmons in Washington contributed to this report.
Posted by WARGA PRIHATIN MALAYSIA (PRIMA) at Sunday, July 19, 2009