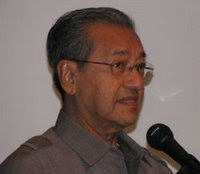 1. The Star reported that Chinese businessmen in Johor Baru want the Crooked Bridge to be built.
2. Newspapers of April 15 reports on an UMNO Youth leader in Johor Baru requesting that the bridge be built for various reasons.
3. When the previous Prime Minister stated that the people of Johore did not want the crooked bridge or any bridge, no one said anything, much less protest.
4. Is it because no one in Johore at that time really wanted the bridge, or is it that no one dared to differ from the open-minded and liberal ex-PM or the Press did not dare to report the real opinions of the people.
5. There was for a very short while complaints regarding the Custom, Immigration and Quarantine complex. No one explained that the inconvenience was due to the complex being designed to complement the proposed bridge but when the bridge was cancelled a temporary road was built to join the complex with the causeway. This caused a misfit as the two could not be properly linked together. Hence the inconvenience. In addition the traffic problems near the causeway remained unsolved.
6. Does the Government need to ask Singapore for permission to build the now desirable crooked bridge? Is Malaysia free to do things in its own territory? Are we really independent? I wonder.
Posted by WARGA PRIHATIN MALAYSIA (PRIMA) at Tuesday, April 21, 2009