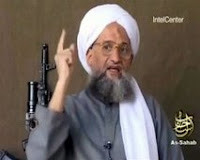 CAIRO – Al-Qaida's No. 2 leader warned the Pakistani people in a new audio message that the U.S. interference in their country's affairs poses a grave danger to Pakistan's future and very existence. The English-language audio message by Ayman al-Zawahri was dated July 14 and addressed to "my Muslim brothers and sisters in Pakistan." In it, the militant group's second-in-command called on Pakistanis to join the fight against the United States or support the battle financially. He warned that without that help "we shall not only contribute to the destruction of Pakistan and Afghanistan, but we shall also deserve the painful punishment of Almighty Allah."
The tape, whose authenticity could not immediately be verified, was released by the al-Qaida media wing As Sahab and was posted on Islamic Web sites that usually carry militant videos and statements. Al-Zawahri and al-Qaida leader Osama bin Laden are rumored to be hiding in Pakistan's lawless tribal belt along the border with Afghanistan. The Taliban have thrived in that region, and some Taliban commanders maintain links to al-Qaida. The region also has been the focus of numerous U.S. missile strikes, which officials say have killed several top al-Qaida fighters. A 2006 strike reportedly missed al-Zawahri in the Bajur tribal region.
Al-Zawahri, who had addressed the Pakistani people in English in August last year, said Pakistan is really ruled by the United States. "The current ruling class in Pakistan is lining up under the cross of the modern Crusade and competing for American bribes. Hence, the actual ruler of Pakistan is the American ambassador, who pays the bribes and issues the orders," he said. He said "the only hope to save Pakistan from this disastrous fate is Jihad" because the political institutions were "either sunk in the swamp of corruption or are too helplessly crippled and paralyzed to bring about any change."
Stressing the need for money, al-Zawahri called on people to join the fight and contribute money. "It is the individual duty of every Muslim in Pakistan to join the Mujahedeen, or at the very least, to support the Jihad in Pakistan and Afghanistan with money," he said. Al-Zawahri's appeal for funds echoes one made last month by Mustafa Abu al-Yazeed, al-Qaida's top commander in Afghanistan who said militants in Afghanistan were hampered by a lack of equipment and money. The al-Qaida deputy's appeal to Pakistanis comes as public opinion in the South Asian nation has swung away from militants and in favor of army offensives against them.
A recent survey showed that 81 percent of Pakistanis believe the activities of the Taliban and other Muslim extremists were a "critical threat" to the country, up from the 34 percent polled on the same question in September 2007. Eighty-two percent said bin Laden's al-Qaida was also a critical threat, exactly twice as many who thought so two years ago. The poll was carried out by Socio-Economic Development Consultants in Islamabad on behalf of WorldPublicOpinion.org. It questioned 1,000 people across Pakistan from May 17 to 28 and had a margin of error of plus or minus 3.2 percentage points.
Posted by WARGA PRIHATIN MALAYSIA (PRIMA) at Wednesday, July 15, 2009