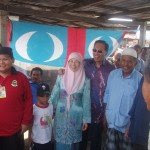 (New York, July 13, 2009) – The Malaysian government should immediately drop politically motivated criminal charges against opposition leader Anwar Ibrahim, Human Rights Watch said today. On July 15, 2009, the Kuala Lumpur High Court will hear Anwar’s application to strike out a sodomy charge against him, and an ongoing defense request for evidence it says is crucial to properly prepare for trial. This is the second time Anwar has been charged with sodomy. He spent six years in prison before his previous conviction for sodomy was overturned in 2004.
Human Rights Watch said the current charge appears politically motivated and lacks credibility.The government has failed to disclose key evidence to the defense, hastily sought to pass a DNA statute that aids the prosecution, and put Anwar at a disadvantage by unnecessarily moving the trial to the high court. In addition, the government allowed the attorney general, who is under investigation for misconduct in Anwar’s previous trial, to be involved in the current case. “This trial is a bald-faced attempt to permanently remove an opposition leader from Malaysian politics,” said Elaine Pearson, deputy Asia director at Human Rights Watch. “The government is trying to manipulate the justice system for political purposes.”
The current charge against Anwar relates to allegations that on June 26, 2008, he had sexual relations with Mohd Saiful Bukhari bin Azlan, a 23-year-old male former volunteer aide to Anwar. Although initially filed as a non-consensual offense, prosecutors later changed the charge to consensual sodomy, though Saiful has never been charged. A conviction would force Anwar to vacate his seat in Parliament and effectively bar him from contesting in the next general election, expected before 2012. Anwar’s July 15 court application to drop the sodomy charge rests on the basis of two medical reports.
Three specialists from the public Kuala Lumpur Hospital endorsed a July 13, 2008 medical report regarding the complainant that found “no conclusive clinical findings suggestive of penetration to the anus and no significant defensive wound on the body of the patient.” A doctor at the private Pusrawi Hospital who examined Saiful on June 28, 2008, two days after the alleged incident, reported the anus as “normal.” The doctor later left Malaysia to escape what he said was persistent pressure to alter his report.
In addition, the defense will reiterate its January 2009 request for at least 10 documents it asserts are necessary for it to properly prepare Anwar’s defense at trial. They include the original closed-circuit television recordings from the alleged crime scene, original specimens from which DNA samples were allegedly obtained, chemist’s notes, witness statements including the complainant’s, and medical reports. To date, the Public Prosecutor’s office has denied it is withholding any documents it is mandated to share under the Malaysian Criminal Procedure Code. - http://anwaribrahimblog.com/
Posted by WARGA PRIHATIN MALAYSIA (PRIMA) at Tuesday, July 14, 2009