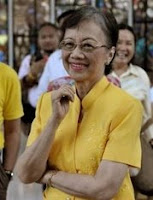 MANILA (AFP) - - Former Philippine leader and democracy icon Corazon Aquino died Saturday following a cardiac arrest after battling colon cancer for more than a year, her son announced. She was 76. "Our mother peacefully passed away at 3:18 am, August 1, 2009 of cardio-respiratory arrest," Senator Benigno Aquino Jr, said in a statement outside the Makati Medical Centre in Manila, where his mother had been hospitalised.

"She would have wanted us to thank each and every one of you for all the prayers and the continuous love and support," he said. "It was her wish for all of us to pray for one another and for the country," Aquino said. A close family friend, Boy Abunda, said funeral arrangements would be announced later in the day. He said Aquino had been surrounded by members of her immediate family when she died.

Friends and foes offered their condolences to the family, while the politically influential Roman Catholic church held special requiem masses.Presidential spokesman Cerge Remonde said the government was declaring a "period of national mourning" as arrangements for a state funeral for Aquino were being made. Oscar Cruz, a member of the Catholic Bishops Conference of the Philippines (CBCP), said Aquino was "God's greatest gift to us (Filipinos)." "She symbolised freedom, justice and what is right," Cruz said. "Now that she has died, she is much bigger in memory. Let us thank God for giving us Tita (Aunt) Cory," he said, referring to the nickname by which the public fondly referred to Aquino.

Aquino, the widow of assassinated opposition leader Benigno "Ninoy" Aquino, was propelled into the spotlight in 1986, when she headed a massive "People Power" movement that toppled late dictator Ferdinand Marcos. A former housewife who reluctantly became president, she went on to restore democracy in the Philippines and rewrite the country's constitution. She also freed all political dissidents jailed by Marcos, and launched peace talks with communist and Muslim insurgents.
Until March last year, when she withdrew from public life after being diagnosed with colon cancer, she had been active in street protests denouncing corruption in the government. A humble moral crusader, Aquino once famously rejected an offer for a presidential limousine to the inauguration of her successor, Fidel Ramos.
Years later in 2001, Aquino joined the church in rallying the public in a military-backed peaceful revolt that ousted president Joseph Estrada, a self-proclaimed womaniser and former action movie star whose regime was also rife with corruption.
More than a month ago, she was rushed into emergency medical care after she lost appetite and her weight fell dramatically. A spokeswoman for the family earlier said Aquino had given up all medical intervention, including chemotherapy, and would leave her fate to God.Just a few days ago, Benigno Aquino said his mother's cancer had spread to her liver.
Posted by WARGA PRIHATIN MALAYSIA (PRIMA) at Saturday, August 01, 2009