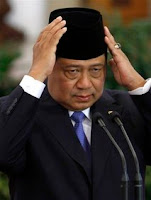 JAKARTA, Indonesia – Indonesia's president has been re-elected to a second five-year term, sparing the country a second round of voting during a nationwide manhunt for terrorists behind two deadly bombings in the capital last week.President Susilo Bambang Yudhoyono, whose policies against corruption and crackdown on Islamist militancy won him widespread support, will be sworn in on Oct. 20 after collecting 61 percent of the popular vote, results released by the Elections Commission showed Friday. Former President Megawati Sukarnoputri came in second at 27 percent, followed by 12 percent for outgoing Vice President Jusuf Kalla, who heads the Golkar party, former dictator Suharto's political machine, the commission said on its Web site.
More than 121 million votes were counted in the July 8 election, but there were no official figures for the number of invalid ballots or voter turnout. Yudhoyono's rivals have accused his party of electoral fraud and say they will formally contest the outcome. Nine days after the vote, suicide bombers killed seven people at two luxury hotels in Jakarta in the first terrorist attacks in the world most populous Muslim nation in nearly four years. There has been a visible increase in security across the vast nation of more than 17,000 islands since the blasts at the J.W. Marriott and Ritz-Carlton that left six foreigners and one Indonesian dead and wounded more than 50 people.
Streets to the Election Commission office in downtown Jakarta were sealed off by police Friday, apparently in anticipation of possible public protests against the election results. Counterterrorism police patrolled the city on motorbikes with automatic weapons. Police raids have been launched in recent days against known supporters of the Southeast Asian militant network Jemaah Islamiyah and Malaysian fugitive Noordin Mohammed Top. No formal suspects have been named.
Posted by WARGA PRIHATIN MALAYSIA (PRIMA) at Friday, July 24, 2009